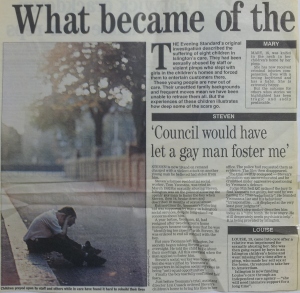 THE Evening Standard’s original investigation described the suffering of eight children in Islington’s care. They had been sexually abused by staff or violent pimps who slept with girls in the children’s homes and forced them to entertain customers there.

These young people are now out of care. Their unsettled family backgrounds and frequent moves mean we have been unable to retrace them all. But the experiences of these children illustrates how deep some of the scars go. MARY, 16, was knifed in the neck in her children’s home by her pimp.

She has now received criminal injuries compensation, lives with a loving boyfriend and has a baby. She is extremely happy.

But the outcome for others whos stories we highlighted has been tragic and sadly predictable.

SIMON is now 18. He came into Islington’s care at age six, after his mother died. He spent term times at a residential school and his holidays at an Islington children’s home. Both the school and home were run by gay men. Simon says he was abused by staff at both.

For legal reasons we cannot name the school: seven of its staff are now facing trial following one of the largest child sex ring inquiries ever conducted in Britain.

‘Simon is suffering from post-traumatic stress disorder,’ says a broken-hearted carer. ‘Is prison the best we have to offer kids so badly betrayed?’ Simon recently left prison and Islington has just paid him £5,000 compensation for his experiences in care.

STEVEN is now 19 and on remand charged with a violent attack on another young man he believed had stolen from him.
Steven’s former residential social worker, Tom Yeomans, was tried in March 1992 for sexually abusing Steven. Islington was on the point of allowing the openly gay man to foster the boy when Steven, then 14, broke down and described 18 months of sexual abuse.

Extraordinarily, Yeomans’s fostering bid was supported by many in Islington social services, despite long-standing concerns about him.

A year before, Yeomans, 45, had resigned after two children’s home managers became suspicious that he was ‘identifying too closely’ with Steven. He was ordered to end all contact with the boy.
But once Yeomans left Islington, he secretly began taking Steven away overnight. He told the child to lie about their meetings. All this emerged when the man applied to foster him.

Steven’s social worker was horrified, but she was vilified by Yeomans’s supporters in Islington social services as being ‘anti equal opportunities’. Finally the boy tearfully confirmed her fears.

Just before Yeomans’s trial, assistant director Lyn Cusack ordered Steven’s children’s home to bring his files to her office. The police had requested them as evidence. The files then disappeared.

The trial swiftly collapsed – Steven’s allegation was uncorroborated and he crumbled under aggressive questioning by Yeomans’s defence.

Judge Mitchell QC ordered the jury to find Yeomans not guilty, but said he was halting the trial ‘reluctantly’. He branded Yeomans a liar and his behaviour ‘irresponsible … it displayed at the very least poor judgment’.
Steven’s step-mother describes him today as a ‘time bomb. He is so angry. He still desperately needs psychiatric help’. It is being provided by Islington.

LOUISE, 15, came into care after a relative was imprisoned for sexually abusing her. She was then gang-raped by boys in an Islington children’s home and went missing for a time after a pimp, who made her sell sex at the home, threatened to take her to Amsterdam.

Islington is now funding Louise’s care through an independent care agency – ‘she will need intensive support for a long time’.

SHANE, then 19, alleged he was sexually abused by the former deputy superintendent of his children’s home. A police investigation found suggestive photos of Shane, but there was insufficient evidence for a prosecution. He is still in touch with Islington which provides him with a flat. KATE, 18, was involved with a convicted paedophile, and social workers feared she was recruiting other children in care into a sex ring. A man they believed was her pimp was allowed to sleep with her in the home. She became pregnant. She is now in a stable relationship and is living in a council-provided home.

DEAN, 23, was brutally abused by a volunteer at a residential school where Islington had placed him. His assailant, Roy Caterer, was imprisoned for seven years for the abuse of Dean and several other boys. Dean received no therapy or other help from Islington, despite his social worker’s pleas. When we found Dean, he was suicidal.

WHERE ARE THEY NOW?

YEOMANS was working for Westminster social services at the time of his trial. He resigned in November 1992, a month after we first wrote about him.

LYN CUSACK, Islington’s Assistant Director, was forced to resign in November 1993, following our revelations about the disappearance of the files on Steven and Simon.

MARTIN HIGGINS, Islington’s director in charge of neighbourhood services, which embraced the social services department, resigned in February 1994 – the week after the council received a damning report on the death of a baby in social services’ care.

SANDY MARKS, Chair of Islington social services committee, was deposed as chairman by other Labour members this month. She remains a councillor.

THE Yeomans case also illustrates the phenomenon highlighted in Ian White’s report of staff leaving Islington with excellent references despite grave concerns about them.

The Evening Standard has obtained the draft of Yeomans’s reference. It says he was ‘reliable, had a conscientious approach towards his work and showed good communication skills … he was able to carry out his duties within the Council’s Equal Opportunities Policy.

‘In particular, Mr Yeomans had an ability to deal effectively with the sometimes difficult and challenging behaviour of ‘troubled’ young people.’

Ironically, this was written by the children’s home head who banned Yeomans from contact with Steven.