The Elm Guest House story broke on 7th August 1982, when the Daily Express reported that “at least three MPs, a member of staff at Buckingham Palace, and leading lawyers, doctors and City businessmen” were questioned as part of inquires relating to “a vice ring” in “a brothel in a smart London suburb”.

Over the next 10 days more lurid allegations emerged in almost every national newspaper. A police raid on the guest house in Rocks Lane, Barnes, involving ‘up to 60 officers’ found ‘a huge store of pornographic material including video tapes’. ‘There were also whips, chains and ropes’. ‘There were two little boys being used as child prostitutes’. It was also revealed that Scotland Yard detectives were investigating the disappearance/murder of eight-year old Vishal Mehrotra and fifteen-year old Martin Allen in connection with the guest house.

These links are all the national news reports that I have found for those ten days about the Elm Guest House paedophile ring:

After those initial 10 days of reporting there was nothing more in the papers. The reason for this silence is revealed in an article which appeared in Capital Gay magazine from August 1982.

Sir Michael Havers played a leading role in the Sir Peter Hayman cover-up, and told Geoffrey Dickens not to name the paedophile diplomat in Parliament. Havers argued that Hayman should have retained his anonymity, and didn’t think the British public needed to know that powerful Establishment figures abused children.

Scotland Yard denied the allegations made by the Daily Express that the guest house’s visitor list included three MPs and a member of Buckingham Palace staff. A spokesman for Elm Guest House told Capital Gay “these were professional business people. We are talking about barristers, doctors, a couple of priests and a vicar”.

It’s clear that Scotland Yard, Sir Michael Havers, and the Elm Guest House lawyers were all following the same script. It’s easy to blame the press for their part in the cover-up, but they were up against the most senior police and law officers in the country.

The most striking thing about the Capital Gay article is the strenuous denial of any link to the murder/disappearance of Vishal Mehrotra and Martin Allen, both of whom disappeared not far from Rocks Lane bewtween 1979 and 1981. Vishal Mehrotra went missing on the night of the Royal Wedding in 1981, when the Elm Guest House paedophiles were having a ‘Kings and Queens party’.

Capital Gay were the only media outlet to report on Elm Guest House for many years. It was a distinctly pro-paedophile paper, and was always first on the scene with paedophile news. They ran a story about an ‘Anti-Police Protection Fund’ which gave support to the beleagured paedophile brothel. Paul Rinehart, who was connected to the Elm Guest House paedophile ring, donated £1000 to the cause, and paid for a full page advert in Capital Gay. 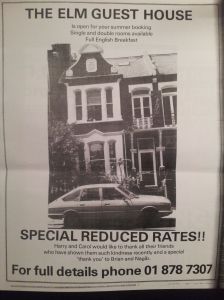 They ran a series of articles which ended with the fixed Old Bailey trial in May 1983 in which most charges against the guest house owners, Haroon and Carole Kasir, were dropped, and the Kasirs walked away with just a fine. None of the prominent paedophiles were charged.

After 1983 there was nothing until 1990, when former guest house owner Carole Kasir died in highly suspicious circumstances from ‘an insulin overdose’. The coroner was the late Dr. John Burton, a ‘safe pair of hands’ who also presided over the Blair Peach and Lady Diana inquests. None of the newspapers who originally reported in 1982 ran a story on the inquest, other than the Times, who had run a denial of the allegations and therefore hadn’t received legal threats. This left the Sunday Mirror (who hadn’t reported in 1982 and were able to report), The Sport (which weren’t around in 1982), and local papers. So what would have been a massive story was kept relatively quiet, and headlines like this one from The Sport could be ignored because they came from a downmarket paper, and therefore most people would assume the allegations weren’t true:

After 1990 there was nothing reported for 22 years, when a new police investigation was launched following Tom Watson’s PMQ in October 2012.