Thank you for your virtually identical replies to my Open Letter to Mr. Cameron and as you obviously speak with one voice I will reply to both of you.

I beg to differ with you both that the issues I raise are a matter for the Home Office.
They are issues for Government and Parliament.

I did anticipate that the response I would receive would be dismissive and derisory.

Perhaps I expected more than a 5 line response to a letter of several thousand words but I knew that it was naive of me to think that politicians would stick to their promises and honour their soundbites.

On what basis is the Home Office best placed to respond to the issues I raise.

Are you both saying that the Home Office will set up the same investigative process that was immediately set up by Parliament to look in to the behaviour of the BBC in the wake of the Savile revelations,remembering Mr. Cameron’s statements in October 2012 that ” collusion should never happen again” and ” that ALL institutions should look inwards and examine their role in past collusion and cover ups “.

Are you saying that the Home Office will address the role of the security services and allegedly fellow MP’s in blocking Police investigations in to Cyril Smith’s paedophile career.

Are you saying that the Home Office will address the issue that Morrison, Smith and Savile were knighted many years after many key people in authority allegedly knew they were paedophiles.

Are you saying that the Home Office will address the issue of  the statement by Chief Whip Tim Fortescue that paedophile activity by an MP was recorded in the Dirt Book and used for political leverage in the lobby rather than a referral to the Police.It is ironic now that you both feel that such issues need to be passed to the Home Office rather than address them at the highest level of Government and Parliament.
You will know that as well as my ” Open Letter ”  I wrote to you both and Ed Milliband asking you all to ” forget your political roles and act as fathers of young children, decent citizens and show the moral courage to stop the cover-ups and allow all abusers to face justice regardless of their privileged position in society “.
You have made it very clear to me how little regard you have for a person like myself whose only motivation is to ensure that the wrongs of the past are addressed by the most powerful institutions in our society, as there is now no doubt that a small minority of people within those institutions both individually and collectively have abused the most vulnerable children in our society.
Yours respectfully,
_____________ (the source of Tom Watson’s PMQ) 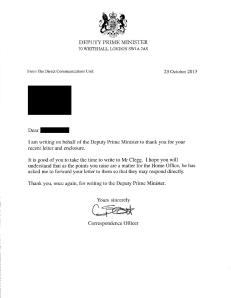