17 year old Vivian Loki went missing in Islington on 22nd December 1987. She worked as a painter and decorator for Islington Council. Her body was eventually found in March 1988 in a black plastic bag in a locked meter cupboard. The cupboard was kept locked and only Islington Council and the fire brigade had keys for it. A homeless man called Adolphus Raymond Farrell was charged with murder and disposing of a body to prevent burial. An inquest into her death was opened and then adjourned with no set date to resume.

I could not find any further information either on the charges against Farrell or the outcome of the inquest. 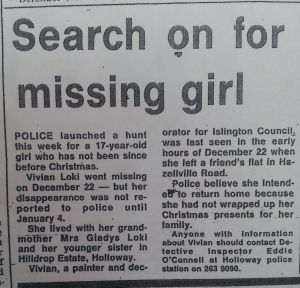