Thanks to Ian Pace ianpace.wordpress.com for finding this important article 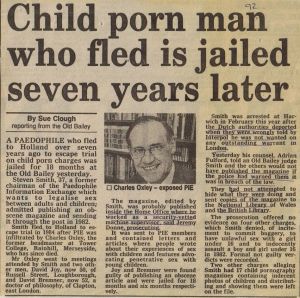 A paedophile who fled to Holland over seven years ago to escape trial on child porn charges was jailed for 18 months at the Old Bailey today. Steven Smith, 37, a former chairman of the Paedophile Information Exchange which wants to legalise sex between adults and children, admitted publishing an obscene magazine and sending it through the post in 1982. The magazine, edited by Smith, was probably published inside the Home Office where he worked as a security-vetted machine supervisor, said Mr Jeremy Donne, prosecuting. It was sent to PIE members and contained letters and articles where people wrote about their experiences of sex with children and features advocating penetrative sex with young children. Smith fled to Holland to escape trial in 1984 after PIE was infiltrated by Charles Oxley, a Liverpool headmaster who has since died. Mr Oxley went to meetings attended by Smith and two other men, David Joy, now 50, of Russell Street, Loughborough, and David Bremner, now 52, a doctor of philosophy, of Clapton, east London. Joy and Bremner were found guilty of publishing an obscene article and were jailed for 18 months and six months respectively. Smith was arrested at Harwich in February this year after the Dutch authorities deported him when they were wrongly told by Interpol that he was not wanted on any outstanding warrant in London. When Smith tried to have the charges dropped his counsel, Mr Adrian Fulford, told an Old Bailey judge the information was wrong and resulted from “some sort of muddle” between Interpol in Holland and London.

Today in mitigation Mr Fulford said Smith and the others would not have published the magazine if the police had warned them it was in breach of the law. They had not attempted to hide what they were doing and sent copies of the magazine to the National Library of Wales and the British Library. The prosecution offered no evidence on four other charges, which Smith denied, of incitement to commit buggary, to have unlawful sex with a girl under 16 and to indecently assault a boy and girl under 16 in 1982. Formal not guilty verdicts were recorded. Two other charges alleging Smith had 17 child pornography magazines containing indecent photos of children and distributing and showing them were left on the file.