Sir Michael Havers was appointed as Attorney General by Margaret Thatcher in 1979, and was made Baron Havers in 1987. He intervened three times between 1981 and 1983 to stop the investigation and exposure of Establishment paedophiles, and to prevent the publication of stories which showed that Establishment figures were members of the Paedophile Information Exchange.

Although none of this implicates Havers’ sister, Baroness Butler-Sloss,in any way, it seems at the very least deeply inappropriate to have someone heading a ‘historic’ child abuse inquiry whose own brother played such a major role in the protection of Establishment paedophiles throughout the 1980s.

In 1981, Sir Michael Havers warned Geoffrey Dickens not to name senior diplomat Sir Peter Hayman as a paedophile in the House of Commons. Dickens ignored his advice, and was publicly condemned by Havers, who said “All Mr Dickens has done is make certain that Sir Peter’s shame and embarassment is known to the world. There cannot be any justification whatsoever for what has happened. How can the public have gained by this? How can it be in the public interest to name this man?“.

Sir Michael Havers defended the decision not to prosecute Hayman despite possessing a huge collection of images of child abuse including – as Barry Dickens revealed earlier this week – babies being abused in their prams. Dickens accued Sir Michael of taking part in a “whitewash and “the cover-up of the century”.

The Elm Guest House scandal involved powerful Establishment figures sexually abusing young boys at a guest house in Barnes. The story hit the headlines in August 1982 and ran for just 10 days, but then the coverage stopped suddenly and it wouldn’t be mentioned again in a British newspaper for many years. The reason for this news blackout seems to have been threats of legal action. Sir Michael Havers “personally investigated” complaints against newspapers from lawyers representing Elm Guest House.

Geoffrey Prime was a former Cheltenham GCHQ worker who was also spying for the Russians, and ended up being jailed for 38 years. He had also been charged with sex offences against two young girls, and during the raid on his home police discovered Paedophile Information Exchange literature that would only have been available to members of the organisation. The Sun reported this, and said that Sir Michael Havers had held back from mentioning Prime’s PIE membership during his trial “to avoid embarassing security chiefs”. Sir Michael complained to the Press Council, but The Sun stood by their story and refused to reveal their source. Geoffrey Dickens had raised The Sun’s allegation in Parliament and forced Mrs Thatcher to make a strong denial. 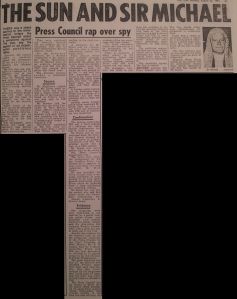 Elm Guest House: The History of a Cover-Up