“Bunking off is not the crime” Letter from Roger Moody, Islington Gazette, 23 May 1991 p.8 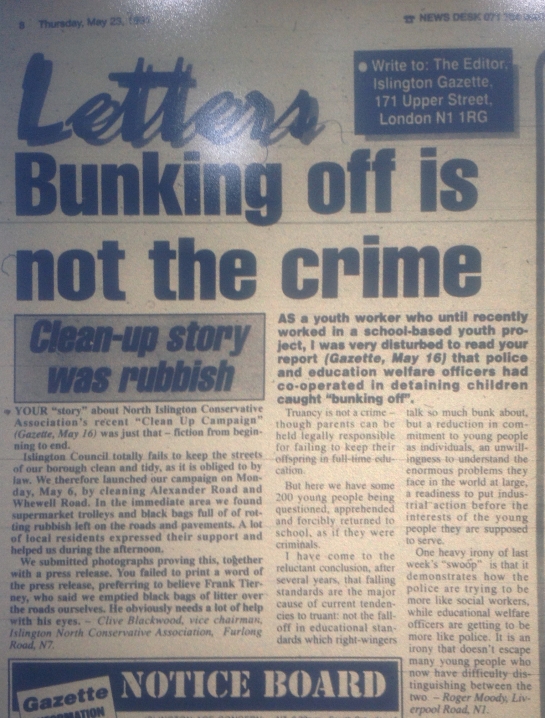 In March 1991 Roger Moody, pro-paedophile rights campaigner and paedophile political activist, wrote to the Islington Gazette (address given as Liverpool Road, N1), identifying himself “as a youth worker who until recently worked in a school-based youth project”.

Was Roger Moody employed in Islington as a youth worker based within a school? Which school was he working within? Was Islington Council his employer?

Within 18 months of Moody losing his job, the Evening Standard exposed the extent to which Islington’s children’s homes had been infiltrated by paedophiles, pornographers and pimps.

The third meeting of the Conspiracy Against Public Morals committee (PIE’s legal defence publicists, strategists and fundraisers) gathered on 11 September 1979.

Six months’ previously in April 1979 Moody had been acquitted of 4 counts of indecent assault and 1 count of attempted buggery on a 10 year old boy — with the help of a character witness statement from an MP read out in court for his defence.

Was Roger Moody the Roger in attendance at the CAPM committee alongside Sandy Marks? If so, was Sandy Marks aware Roger Moody, as an out and proud self-proclaimed paedophile worked with children in Islington and continued to do so until at least 1991? If aware of Moody’s views on the positive benefits paedophiles bring to the social welfare of children when working in child-care roles, did Sandy Marks take any steps once serving on the Social Services Committee from 1982 to ensure Roger Moody’s ability to work with children was curtailed?

James Goudie QC and Holly Stout’s recent report for Islington Council recommends further independent investigation into Sandy Marks and her role in the 1995 White Report, and states that evidence should be examined as to “the nature, extent and duration of Sandy Marks’ involvement in Fallen Angels, and any other pro-paedophile groups;”

Two other pro-paedophile groups with links to Islington were Paedophile Information Exchange (PIE) and Paedophile Action for Liberation (PAL), both of which Roger Moody contributed to meetings and newsletters of, hoping to shape their thinking along more radical socialist revolutionary lines.

The extent to which all of these pro-paedophile lobbying groups, including Fallen Angels, were able to gain influence and traction in a council which its own Chief Executive declared “vulnerable to lobbying groups”(1) is the wider context in which to examine Sandy Marks’ conduct, associations and actions, influencers and influence. Therefore Goudie QC’s inclusionary language is to be welcomed. Whether Islington Council listens remains to be seen.

I’M NO THREAT TO KIDS ANY MORE

A CONVICTED sex offender named by the inquiry told The Mirror last night he is no longer a threat to children.

Taylor, 58 – No2 in charge at Bersham Hall home in Wrexham, Clwyd – was convicted by the town’s magistrates in 1980 of two indecent assaults and given two years’ probation. In 1993 he was cautioned for six more indecent assaults.

He is one of 28 “missing” people named in the report as potential dangers to young people.

The list was circulated to agencies across the UK amid fears that many could still be working with children.

But Taylor, a cabbie in Nantwich, Cheshire, till he retired after a heart attack last month, said he has lived openly at the same house for 20 years.

He had no idea what his neighbours’ reaction would be to revelation of his sex crimes. “I just want to be left alone.”

In November 1986, Derek Slade was convicted of brutal physical assaults on boys aged 8 and 11, causing serious bodily harm. His victims were pupils at Dalesdowne School at Dial Post, Horsham, West Sussex, a private school he was the Headmaster of. Slade was jailed for 3 months. The sentence was reduced to a conditional discharge on appeal.

At his trial Slade’s defence barrister, Simon Coltart, called on Slade’s old schoolfriend to testify as to Slade’s character:

“Islington councillor Derek Sawyer, a friend of school days, said Slade was a well-liked teacher. He believed corporal punishment was an effective aid to discipline.

Tuesday 7 January 1992, Malcolm Raywood, was living at an ex-offenders hostel in Southgate Road, Islington and working as a car park attendant who worked in St John’s Square. Police believed he was stabbed to death by someone known to him on New Year’s Eve or Day. Detective Sergeant Steve Gough gave a quote to the Islington Gazette – an incident room was opened in Upper Street police station.

Raywood had been a defendant (address in Earlsfield) alongside Charles Hornby at the third Playland trial of Piccadilly Circus in 1975. 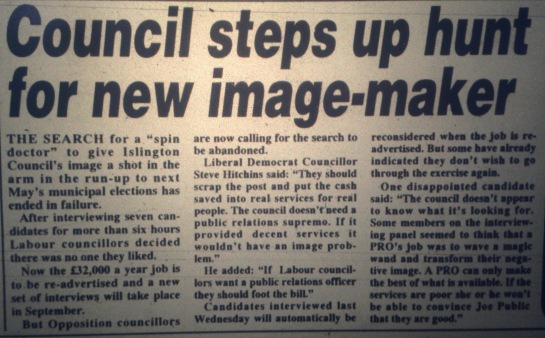