THE police raid was well planned. A wealthy, middle-aged homosexual living in a Cambridgeshire village was suspected of being involved in child pornography.

Local detectives, assisted by Scotland Yard’s Obscene Publications Branch, had the man under surveillance and believed they were about to crack a major paedophile network.

But it all went horribly wrong.

Hocquart was the key to identifying the youths, many of whom were being sexually abused and he was taken in for questioning.

While in the company of police he secretly swallowed a lethal dose of tranquillisers. He collapsed and died in hospital. Police lost their prime suspect and principal witness in one go.

Hocquart’s associates denied involvement but officers found correspondence linking Hocquart with another single man in his forties, a former Islington Council children’s home worker whose identity has to be withheld for legal reasons.

Although the bulk of the children photographed could not be traced, detectives were able to identify one as a youngster once in the care of the Islington man.

This boy, whom we call Shane, is now 20. He had, for years, been in the care of Islington Council. It was months before police tracked him down.

When they did, Shane admitted that the man, a residential worker at the home where he lived, had sexually abused him over many years.

It was one of the few leads police had. The man had been at the home for 16 years but was now living in the south of England and working at a centre which Islington youngsters continued to visit.

The man was arrested and the inquiry handed over to local police. Detectives from the special investigation unit contacted Islington Council for assistance. What followed is nothing short of scandalous.

The Standard can show that Islington Council withheld vital documents from police about their former employee and the boy. Senior council officials insisted they either didn’t exist or couldn’t be found.

Only after this newspaper established the documents did exist and informed police, did Islington make them available.
The Standard has established that although Islington did ban the man from taking the boy away at weekends, this proved ineffective. Before and after leaving his job with Islington, the man showered Shane with expensive toys, clothing, cigarettes and alcohol as well as continuing to take him away.

It is standard practice by local authorities to act swiftly and thoroughly when suspected cases of child abuse are brought to their attention. This includes interviewing staff and children involved and providing a confidential phone line. Islington took none of these steps. In fact, key staff did not even know of the police investigation until the Standard contacted them.

The police investigation has now come to a halt. Police said: ‘We are taking no further action at this stage’.
Shane has been interviewed by the Standard in the presence of his mother. At times tearful, at times angry, he insisted that he was sexually abused by his residential worker over several years. His mother said she warned the council but was ignored.

The problem police face is that they lack any corroboration of the boy’s allegation, aside from two suggestive photographs. In the witness box it would be his word against that of the residential worker. When police raided his home, they found it was like a ‘shrine to boys’. They believe the man probably abused numerous children in care, but have had no help from Islington in tracing any.

The Standard makes no assertion as to the man’s culpability in the matter. We simply record the facts as they exist.
But it is evident that Islington initially hindered the police investigation and has subsequently responded with minimum assistance. Colleagues of the man have not been interviewed, nor have children once in his care. No Islington social worker has been asked to look at the hundreds of indecent photographs to see if, as suspected, other Islington children were involved.

Shane was taken into care in his early teens when his mother became seriously ill after divorcing his violent, alcoholic father. She said: ‘I sent Shane to social services for help and they totally destroyed him and what-ever relationship was left between us.’

Shane was placed in a home where the residential worker and his boss were single men. The lonely, fatherless boy was swiftly befriended by the worker, alarming both mother and social workers. But against the mother’s wishes and frequent protests, her son remained in care for the rest of his childhood.

The Standard has discovered that when the man was eventually banned from taking the boy away, this was opposed by the home’s head. The boy has now told us that this person, who has resigned, also tried to abuse him. The Standard has passed this information on to police. The head now lives abroad.

A residential worker who was at the home some years later said: ‘I never even knew there was a ban. He took the boy away about every other weekend. I definitely thought there was something going on, but the staff there were really strange. There was a lot of alcohol abuse on duty. I felt really isolated and asked to be moved.’

Shane told us: ‘He’d take me to his room and give me cigarettes and whisky and dry ginger ale to drink and abuse me. I was walking around the home drunk every day.’

The Standard has discovered a startling omission from Shane’s files. They make no reference to a kidney failure when he was 13. ‘He was in hospital for ten days,’ says his mother. ‘I’m sure it was the drink.

‘This man was giving him whisky, Reeboks and £60 remote-control cars. I’d raise all this at case review meetings, and extra meetings I called. But there was always a kind of silence. It was glossed over. I was told: ‘We’ll look into this.’ I felt the social workers too were being controlled by somebody. ‘Who could I turn to? I just felt defeated.’

Shane says he finally broke off from the man when he was 16 and moved to a teenage unit. ‘I had a breakdown there because of what had happened to me and became completely wild and violent.’ He was eventu-ally imprisoned for car theft.

Paedophiles’ victims, who are often carefully-targeted, lonely children, are torn by guilt and rage. Guilt because they ‘gave in’ when bribed, scared or hungry for affection from a father figure, and rage when they eventually realise they are not wanted for themselves, just the adults’ sexual gratification.

The photos of Shane found in the police raid on Neil Hocquart’s home showed him aged around 13, in the residential worker’s room at the children’s home, dressed only in underpants and smoking a cigarette. Another is of him lying in bed, half covered up but with his top half naked and the man lying next to him.

Police believe other Islington children could have been in the photographs. Yet, as we have already demonstrated, Islington offered no assistance to police, other than the delayed offer of documents.

Islington’s response to what could be a major child abuse network is nothing short of scandalous. But the police, too, seem to have shown a lack of enterprise.

Last week they wrote to Shane to say they had found a child-sized pair of his underpants when they raided the man. Did he want these returned?

It was left to the Standard to break it to him and his mother, who had prepared themselves for a court case that, with no other witnesses, it will not go ahead. The mother said: ‘Shane doesn’t trust anyone, he despises authority.’
His anger is frightening. When told that the police will not, after all, be prosecuting the man he alleged abused him so cynically for so many years, he said: ‘If the police don’t get him, I will.’

By Eileen Fairweather and Stewart Payne 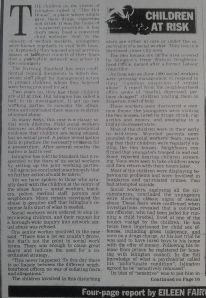 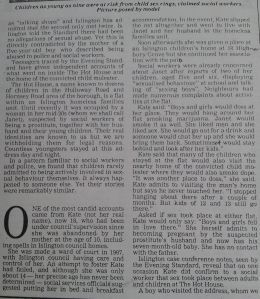 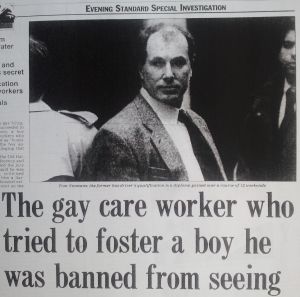 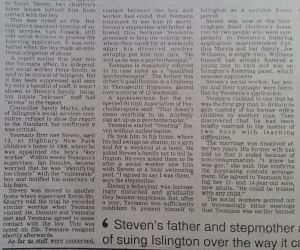 By Eileen Fairweather and Stewart Payne