Spyway School was situated in Langton Matravers, Dorset until 1983, before relocating to East Sussex, and the Dorset site was then used for an adolescent psychiatric unit called Langton House. The headmaster of Spyways, Norman Windfield, is thought to have committed suicide before his case came to court.

From The National Archives:

The school was founded in 1973 as the Woodyates Study Centre and it moved into more spacious premises at Swanage, Dorset in 1976, when it became the Spyway School moved to Gillmans Hill, St Leonards, Hastings in 1983 and it closed in July 1990. The school was a co-educational day and boarding school for children from five to eighteen years

Please send any press cuttings on either Langton House or Spyway School to spotlightonabuse@gmail.com 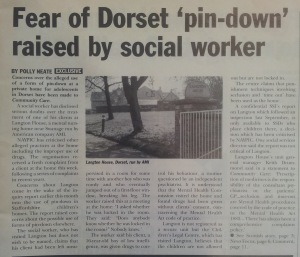