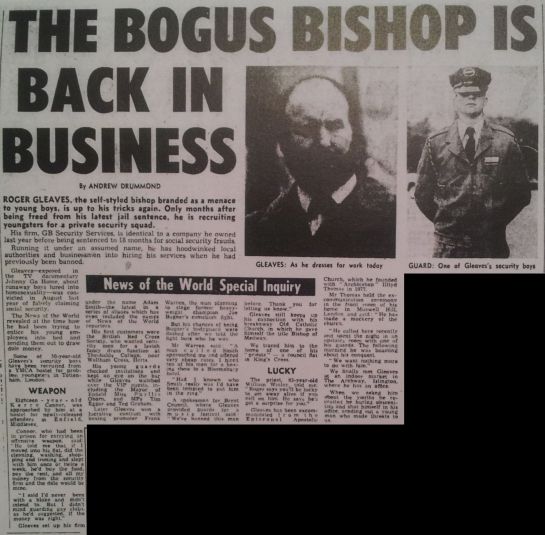 Transcript:
THE BOGUS BISHOP IS BACK IN BUSINESS (News of the World, 24th October 1982)

Roger Gleaves, the self-styled bishop branded as a menace to young boys, is up to his tricks again. Only months after being freed from his latest jail sentence, he is recruiting youngsters for a private security squad.
His firm, GB Security Services, is identical to a company he owned last year before being sentenced to 18 months for social security frauds.
Running it under an assumed name, he has hoodwinked local authorities and businessmen into hiring his services when he had previously been banned.
Gleaves—exposed in the TV documentary Johnny Go Home, about runaway boys lured into homosexuality—was convicted in August last year of falsely claiming social security.
The News of the World revealed at the time how he had been trying to entice his young employees into bed and sending them out to draw dole money.
Some of 50-year-old Gleaves’ security boys have been recruited from a YMCA hostel for problem youngsters in Tottenham, London.
Eighteen-year-old Kerry Connor, was approached by him at a hostel for newly-released offenders in Enfield, Middlesex.
Connor, who had been in prison for carrying an offensive weapon, said: “He told me that if I moved into his flat, did the cleaning, washing, shopping and ironing and slept with him once or twice a week, he’d buy the food, pay the rent, and all my money from the security firm and the dole would be mine.
“I said I’d never been with a bloke and didn’t intend to. But I didn’t mind guarding gay clubs, as he’d suggested, if the money was right.”
Gleaves set up his firm under the name Adam Smith—the latest in a series of aliases which has even included the names of News of the World reporters.
His first customers were the British Red Cross Society, who wanted security men for a lavish fancy dress function at Theobalds College, near Waltham Cross, Herts.
His young guards checked invitations and kept an eye on the bar while Gleaves watched over the VIP guests, including the Mayor of Enfield Miss Phyllis Oborn, and MPs Tim Eggar and Ted Graham.
Later Gleaves won a lucrative contract with boxing promoter Frank Warren, the man planning to stage former heavyweight champion Joe Bugner’s comeback fight.
But his chances of being Bugner’s bodyguard were dashed after we told the fight boss who he was.
Mr Warren said: “A man called Smith approached me and offered very cheap rates. I hired ten of his men for a boxing show in a Bloomsbury hotel.
“Had I known who Smith really was I’d have been tempted to put him in the ring.”
A spokesman for Brent Council, where Gleaves provided guards for a music festival said: “We’ve banned this man before. Thank you for letting us know.”
Gleaves still keeps up his connection with his breakaway Old Catholic Church, in which he gave himself the title Bishop of Medway.
We traced him to the home of one of his “priests” – a council flat in King’s Cross.
The priest, 83-year-old William Winley, told me: “Roger says you’ll be lucky to get away alive if you call on him. He says he’s got a surprise for you.”
Gleaves has been excommunicated from the Episcopal Apostolic Church, which he founded with “Archbishop” Illtyd Thomas in 1977.
Mr Thomas held the excommunication ceremony in the front room of his home in Muswell Hill, London ,and said: “He had made a mockery of the church.
“He called here recently and spent the night in an upstairs room with one of his guards. The following morning he was boasting about his conquest.
“We want nothing more to do with him.”
We finally met Gleaves at an indoor market in The Archway, Islington, where he has an office.
When we asked him about the youths he recruited he hurled obscenities and shut himself in his office, sending out a young man who made threats to us. 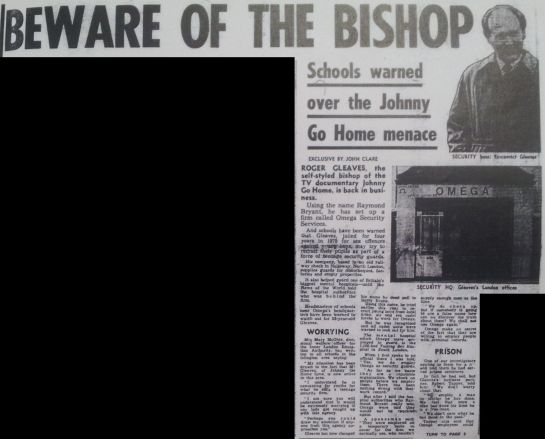 Roger Gleaves, the self-styled bishop of the TV documentary Johnny Go Home, is back in business.
Using the name Raymond Bryant, he has set up a firm called Omega Security Services.
And schools have been warned that Gleaves, jailed for four years in 1975 for sex offences against young boys, may try to recruit their pupils as part of a force of teenage security guards.
His company, based in an old railway shack in Holloway, North London, supplies guards for discotheques, factories and empty properties.
It also helped guard one of Britain’s biggest mental hospitals—until the News of the World told the hospital authorities who was behind the firm.
Headmasters of schools near Omega’s headquarters have been warned to watch out for 53-year-old Gleaves.
Mrs Mary McGhie, divisional welfare officer for the Inner London Education Authority, has written to all schools in the Islington area saying:
“My attention has been drawn to the fact that Mr Gleaves, of Johnny Go Home fame, is now active in this area.
“I understand he is canvassing for youths for what he calls a teenage security firm.
“I am sure you will understand that it would be extremely worrying if any lads got caught up with this agency.
“Perhaps you could draw my attention if anyone from this agency approaches you.”
Gleaves has now changed his name by deed poll to Barry Evans.
Using this name, he tried earlier this year to recruit young boys from local army, air and sea cadet forces to work for Omega.
But he was recognised and all cadet units were warned to look out for him.
The metal hospital which Omega were employed to guard is the 1,100-bed Tooting Bec Hospital in South London.
When I first spoke to an official there I was told “Yes, we do employ Omega as security guards.
“As far as we know they are a reputable organisation. We check on people before we employ them. There has been nothing wrong with their work record.”
But after I told the hospital authorities who Raymond Bryant really was, Omega were told they would not be required again.
A spokesman said: “They were employed on a temporary basis to cover for the firm we normally use, who couldn’t supply enough men at the time.
“We do check up, but if somebody is going to use a false name how can we discover the truth about them? We shall not use Omega again.”
Omega make no secret of the fact that they are willing to employ people with criminal records.
One of our investigators applied to them for a job and told them he had served prison sentences.
In fact he had not, but Gleaves’s business partner, Robert Tapper, told him: “We don’t worry about that.
“We employ a man no matter he has done [sic]. We feel that once a man had done his time he is a free man.
“We don’t care what he has done in the past.”
Tapper also said that Omega employees could continue to sign on the dole.
“That’s up to you,” he said. “You can still sign on if you like.
“We pay 80p an hour, cash in hand. We don’t stop any tax. You can sort that out yourself.”
Later Mr Tapper, a director of Omega Security Services, told me: “Yes, my company did supply security guards to Tooting Bec Hospital.
“We worked there six days a week for five weeks, then the contract ended.
“But you have got everything else wrong. Mr Bryant is not Roger Gleaves.
“We did employ Gleaves in the early days, a few months ago, but he was using the name Evans and we did not know who he was.
“Then we discovered the truth, and he was sacked.
“I had never met Gleaves before, so how would I know who he was?
“Mr Bryant is on holiday at the moment, so you can’t speak to him. He might be back on Monday.”
Mr Tapper denied that he knew where Gleaves was.
“I also deny that we employ ex-criminals,” he said. “When somebody comes to us for a job, we check him out before we give him one.
“It’s our business what checks we make. Not just anybody can come in and be employed as a security guard.
“If you publish this you will get a nasty shock. Mr Gleaves is suing the people who have written stories about him.”
The truth is that Gleaves is now back in jail – serving a 150-day sentence in Lincoln Prison for failing to pay a £250 fine.
Last week he lost an appeal at Cardiff Crown Court against his conviction for not making company returns relating to the “Old Catholic Church in Great Brittian [sic]”, a religious sect he was once involved with.
In court Gleaves described himself as a full-time student on a grant of £1,504 from Barnet Council, and said he was no longer a director of any companies.
Gleaves was a central character in the award-winning documentary Johnny Go Home, screened in 1975.
Mr Norman Fowler, Tory Parliamentary candidate for Sutton Coldfield, said: “This is an appalling state of affairs.
“I shall raise it with the Home Secretary as soon as possible.”
Another campaigner for controls on security firms, Mr Bruce George, Labour candidate for Walsall South, said: “This proves what I have been saying for a long time – all you need is a moth-eaten Alsatian and a couple of ex-Post Office uniforms, and you can call yourself a security company. 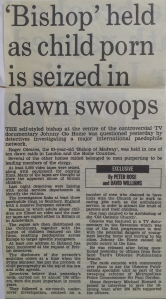 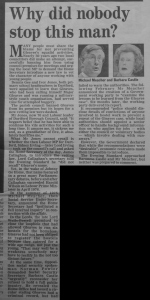 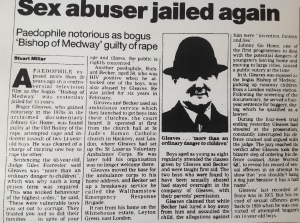