In 1993, Hereford & Worcester social services department produced a report about paedophile ‘child care expert’ Peter Righton and his connections with other child sex abusers who were working in schools and children’s homes across the UK.

“The infiltration of the social work profession by paedophiles appears to be an extensive and serious problem. It has become apparent that there may be a co-ordinated network of professionals at every level who are involved in the abuse of childen.”

“Amongst the men who have been identified from information in Righton’s home as paedophiles or likely paedophiles are a Bishop, current social services and education staff, and civil servants. A number of these individuals have criminal records for the sexual abuse of young boys, and, in the case of teachers, are on the D.E.S.’s List 99

“It is also clear that Righton has used his professional roles and/or contacts to meet and subsequently abuse a significant number of children either in care or known to Social Services Departments in various parts of the country.”

“A child sex ring has been operating at the very heart of the system set up to protect youngsters in care, claims a secret report.

The paedophile network included two bishops, child care experts and academics, according to the document compiled after a joint inquiry by social workers and police.

The Government was last night facing demands for a full public inquiry in to the claims, which were made as a result of an investigation into disgraced former child care consultant Peter Righton.

The report calls for a national unit to be set up to investigate allegations against care staff, which are usually dealt with in isolation by local authorities. The Department of Health confirmed that the matter was raised with them last year and earlier this week claimed that they had passed the information on to the Home Office. But yesterday a spokesman admitted: ‘The letter was not passed on as originally thought because it was felt that a unit already exists, namely the Obscene Publications Squad, albeit that they cover the Met.

It appears that the report was suppressed by Virginia Bottomley’s Department of Health, who refused to even pass on the information on to the Home Office. The police investigation in to Peter Righton was shut down shortly afterwards.

Hopefully the current Operation Fernbridge/Fairbank investigation will finally reveal who gave the orders that led to the protection of well-connected paedophiles and the continuing abuse of vulnerable children. 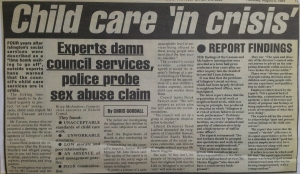