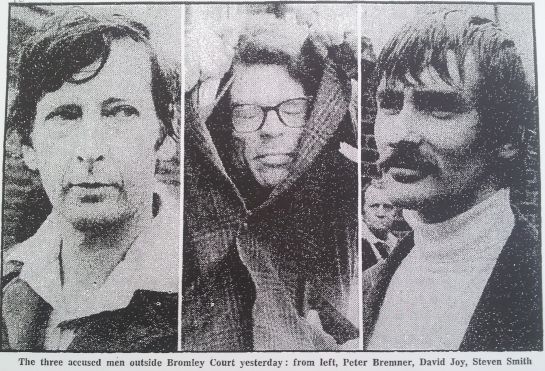 Three men appeared in court at Bromley yesterday all charged with the same seven offences. They were arrested after police investigations into the magazine of the Paedophile Information Exchange.

The alleged offences took place between June and November 1982. 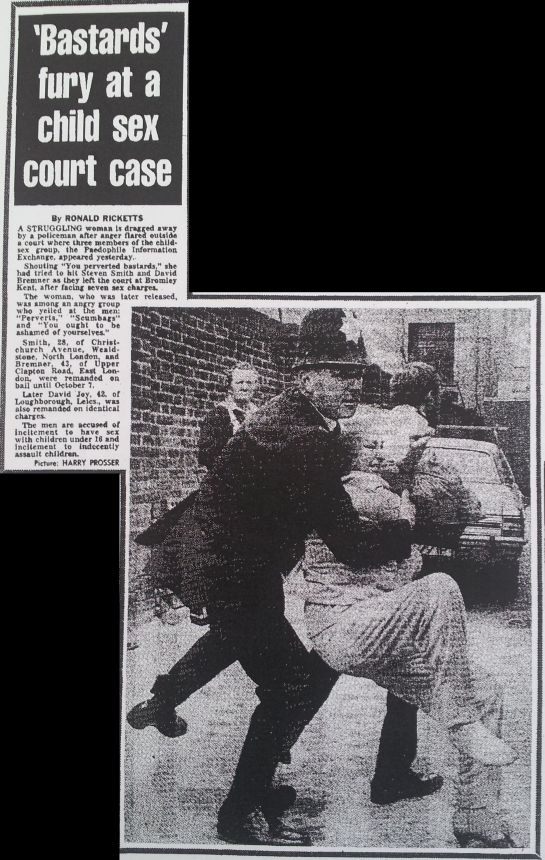 A struggling woman is dragged away by a policeman after anger flared outside a court where three members of the child-sex group, the Paedophile Information Exchange, appeared yesterday.
Shouting “You perverted bastards,” she had tried to hit Steven Smith and David Bremner as they left the court at Bromley Kent, after facing seven sex charges.
The woman, who was later released, was among an angry group who yelled at the men: “Perverts,” “Scumbags” and “You ought to be ashamed of yourselves.”
Smith, 28, of Christchurch Avenue, Wealdstone, North London, and Bremner, 43 of Upper Clapton Road, East London, were remanded on bail until October 7.
Later David Joy, 42, of Loughborough, Leics., was also remanded on identical charges.
The men are accused of incitement to have sex with children under 16 and incitement to indecently assault children. 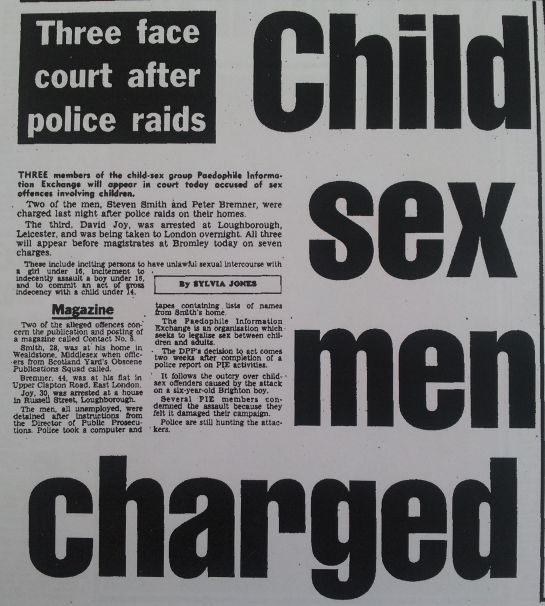 Three members of the child-sex group Paedophile Information Exchange will appear in court today accused of sex offences involving children.
Two of the men, Steven Smith and Peter Bremner, were charged last night after police raids on their homes.
The third, David Joy, was arrested at Loughborough, Leicester, and was being taken to London overnight. All three will appear before magistrates at Bromley today on seven charges.
These include inciting persons to have unlawful sexual intercourse with a girl under 16, incitement to indecently assault a boy under 16, and to commit an act of gross indecency with a child under 14.
Two of the alleged offences concern the publication and posting of a magazine called Contact No. 6.
Smith, 28, was at his home in Wealdstone, Middlesex when officers from Scotland Yard’s Obscene Publications Squad called.
Bremner, 44, was at his flat in Upper Clapton Road, East London.
Joy, 30, was arrested at a house in Russell Street, Loughborough.
The men, all unemployed, were detained after instructions from the Director of Public Prosecutions. Police took a computer and tapes containing lists of names from Smith’s home.
The Paedophile Information Exchange is an organisation which seeks to legalise sex between children and adults.
The DPP’s decision to act comes two weeks after completion of a police report on PIE activities.
It follows the outcry over child-sex offenders caused by the attack on a six-year-old Brighton boy.
Several PIE members condemned the assault because they felt it damaged their campaign.
Police are still hunting the attackers. 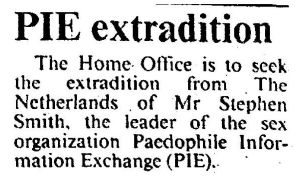