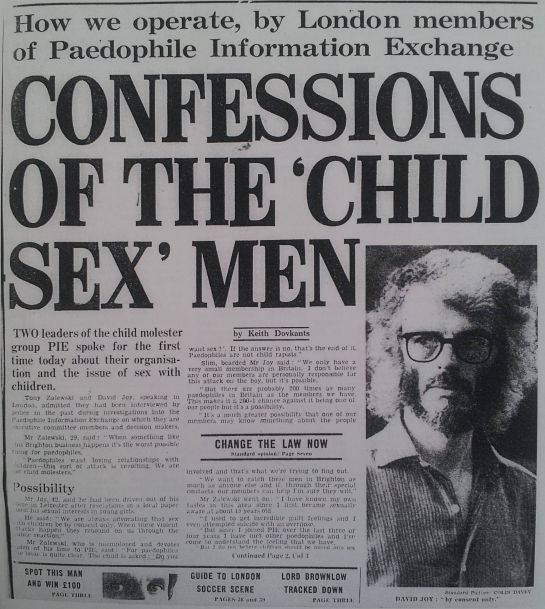 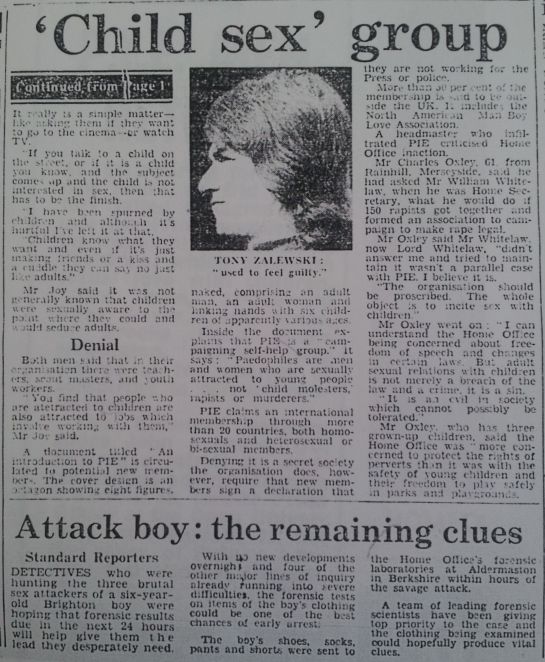 CONFESSIONS OF THE ‘CHILD SEX’ MEN (The Standard, 25th August 1983)
Two leaders of the child molester group PIE spoke for the first time today about their organisation and the issue of sex with children.
Tony Zalewski and David Joy, speaking in London, admitted they had been interviewed by police in the past during investigations into the Paedophile Information Exchange on which they are executive committee members and decision makers.
Mr Zalewski, 29, said: “When something like this Brighton business happens it’s the worst possible thing for paedophiles.
“Paedophiles want loving relationships with children—this sort of attack is revolting. We are not child molesters.”
Mr Joy, 42, said he had been driven out of his home in Leicester after revelations in a local paper about his sexual interests in young girls.
He said: “We are always advocating that sex with children be by consent only. When these violent attacks happen they rebound on us through the public reaction.”
Mr Zalewski, who is unemployed and devotes much of his time to PIE, said: “For paedophiles the issue is quite clear. The child is asked: ‘Do you want sex?’. If the answer is no, that’s the end of it. Paedophiles are not child rapists.”
Slim, bearded Mr Joy said: “We only have a very small membership in Britain. I don’t believe any of our members are personally responsible for this attack on the boy, but it’s possible.
“But there are probably 200 times as many paedophiles in Britain as the members we have. This makes it a 200-1 chance against it being one of our people but it’s a possibility.
“It’s a much greater possibility that one of our members may know something about the people involved and that’s what we’re trying to find out.
“We want to catch these men in Brighton as much as anyone else and if, through their special contacts, our members can help I’m sure they will.”
Mr Zalewski went on: “I have known my own tastes in this area since I first became sexually aware at about 15 years old.
“I used to get incredible guilt feelings and I even attempted suicide with an overdose.
“But since I joined PIE over the last three or four years I have met other paedophiles and I’ve come to understand the feeling that we have.
“But I do not believe children should be forced into sex. It really is a simple matter—like asking them if they want to go to the cinema—or watch TV.
“If you talk to a child on the street, or if it is a child you know, and the subject comes up and the child is not interested in sex, then that has to be the finish.
“I have been spurned by children and although it’s hurtful I’ve left it at that.
“Children know what they want and even if it’s just making friends or a kiss and a cuddle they can say no just like adults.”
Mr Joy said it was not generally known that children were sexually aware to the point where they could and would seduce adults.
Both men said that in their organisation there were teachers, scout masters, and youth workers.
“You find that people who are attracted to children are also attracted to jobs which involve working with them,” Mr Joy said.
A document titled “An introduction to PIE” is circulated to potential new member. The cover design is an octagon showing eight figures, naked, comprising an adult man, an adult woman and linking hands with six children of apparently various ages.
Inside the document explains that PIE is a “campaigning self-help group.” It says: “Paedophiles are men and women who are sexually attracted to young people… not ‘child molesters, rapists or murderers.”
PIE claims an international membership through more than 20 countries, both homosexuals and heterosexual or bi-sexual members.
Denying it is a secret society the organisation does, however, require that new members sign a declaration that they are not working for the Press or police.
More than 50[?] per cent of the membership is said to be outside the UK. It includes the North American Man Boy Love Association.
A headmaster who infiltrated PIE criticised Home Office inaction.
Mr Charles Oxley, 61, from Rainhill, Merseyside, said he has asked Mr William Whitelaw, when he was Home Secretary, what he would do if 150 rapists got together and formed an association to campaign to make rape legal.
Mr Oxley said Mr Whitelaw, now Lord Whitelaw, “didn’t answer me and tried to maintain it wasn’t a parallel case with PIE. I believe it is.
“The organisation should be proscribed. The whole object is to incite sex with children.”
Mr Oxley went on: “I can understand the Home Office being concerned about freedom of speech and changes in certain laws. But adult sexual relations with children is not merely a breach of the law and a crime, it is a sin.
“It is an evil in society which cannot possibly be tolerated.”
Mr Oxley, who has three grown-up children, said the Home Office was “more concerned to protect the rights of perverts than it was with the safety of young children and their freedom to play safety in parks and playgrounds.

A recent Mail on Sunday article by Paul Cahalan and Peter Henn alleged that former Home Secretary Willie Whitelaw ordered police to drop an investigation into a VIP paedophile ring. The full article can be found here

The article mentions an Evening News story by Jeff Edwards, which is reproduced below.

A network of homosexuals preying on schoolboys has been smashed by a special London police squad.
Detectives working from an HQ in the East End have spent almost a year on the inquiry.
Now a dozen men may face trial for a catalogue of serious sex offences including indecent assault and procuring under-age boys.
Police believe that at least one of the men has been involved in obtaining young boys for famous people, including politicians, prominent lawyers, show-business and film stars.
The youngest victim was six years old. Police say the majority of others were only 12 or 13 when the alleged offences were committed.
The investigation covers a three-year period.
Almost 40 youngsters have now made statements to the six man squad based at Arbour Square police station in Stepney and allegations of more than 350 offences, or attempted offences, including buggery, are being considered by the Director of Public Prosecutions.
Police say they have found a link between homosexuals in London and Liverpool.
Many of the youngsters recruited on Merseyside were said to be retarded children from schools for the educationally sub-normal.
London detectives have spent three weeks in the north interviewing victims where 12 youngsters have now made allegations.
In some instances they have been told of boys being tied face down by their wrists and ankles to beds, stripped and assaulted.
The investigation began after detectives became suspicious about activities at an East End cafe.
They kept watch and noted a number of young boys visiting. Shortly after the first arrests were made.
One detective said: “From then on the investigation snowballed into an enormous inquiry.
“We are convinced that many other youngsters may have been dragged into the vice network but have been too afraid or ashamed to tell us.” 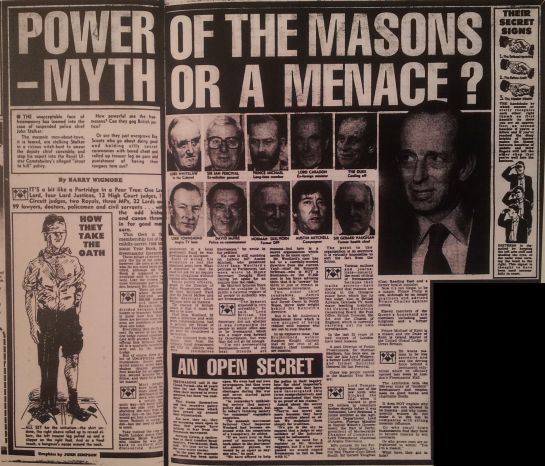 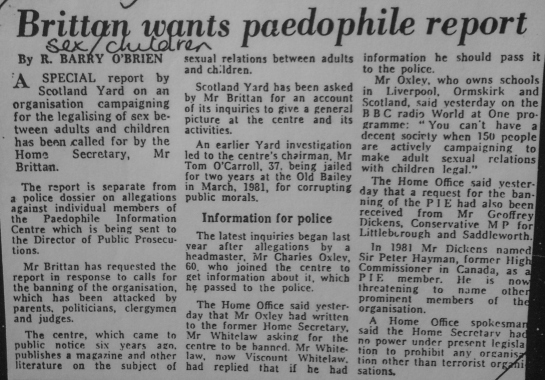 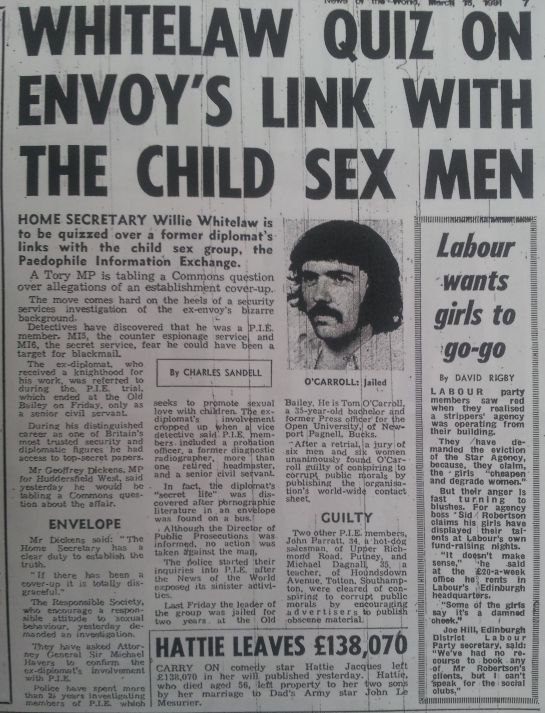