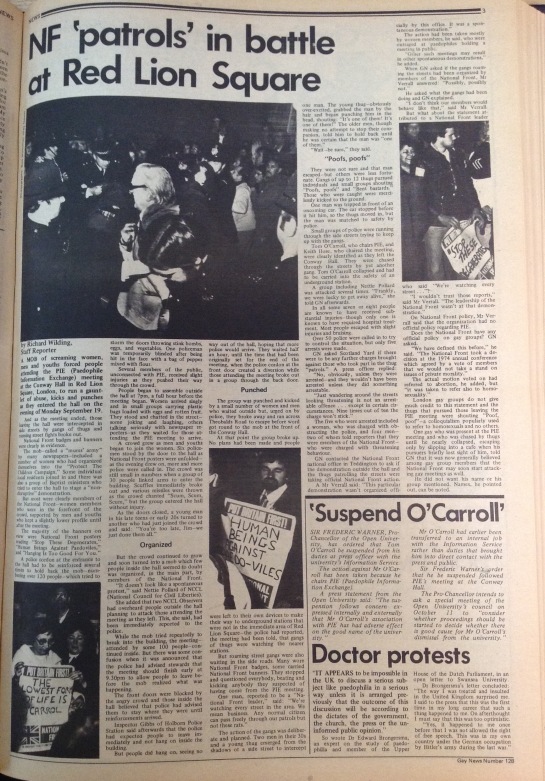 On 11 July 1977 Gay News was defeated in court by Mary Whitehouse’s private prosecution. Gay News was in the process of appealing when it printed the following Editorial repudiating its former stance on PIE. The reaction amongst the paedophile and pro-paedophile rights community who had campaigned for the legal defence of Gay News and its editor Denis Lemon was predictably one of betrayal.

“We now claim, equally calmly and rationally, that PIE deserves no support from the gay movement — indeed that it is diametrically opposed to the aspirations of both the gay movement and the women’s movement.

The deceptively simple question which non-paedophiles have always needed answering is this. Can there exist, between an adult and a minor, a reciprocal sexual relationship which involves no exploitation of adult’s authority — a mutual relationship where each party is aware of what the experience means to the other, and where concern for the other is as important an element as sexual attraction?

Paedophiles say that such relationships can and do exist, and it is reasonable therefore to let them present their evidence.

That however does not appear to be PIE’s position. In a short document published as evidence to the Criminal Law Revision Committee, PIE urged that sex between adults and minor should not be dealt with by the criminal law but by civil procedures. More harm is done to a child by police, parent and teacher interrogation in preparing evidence for a criminal prosecution than could ever have been done by the original sexual relationship they argue.

What should happen is that those with an interest in the child’s well-being should be entitled to apply for an injunction to stop sex taking place in future between the adult and the child.

At the time it was published, we judged from its length and presentation that the document had been compiled in haste and without great thought, and its compilers had merely overlooked the problems raised by their proposed injunction system. Did they really expect a court to issue an injunction against a man (for man it usually is) without it having been proved that sex had taken place between the man and the child? And would the child therefore no t be interrogated in precisely the same way as before? The system requires that sex should already have taken place. How young does a child have to be before sex with an adult is precluded entirely? 12? 8? No mention of any age.

It now seems that our judgment was wrong. Later events, suggest that PIE knew precisely what it was saying — and the the only real change proposed was that the adult should be able to have sex with a child of any age without there being any consequences at law.

The Chairman of PIE told the Daily Mirror: “There would be no penalty for a paedophile having sex with a child under three years old. But he would probably be prevented from it by a system of injunctions which we would like to see brought in.” 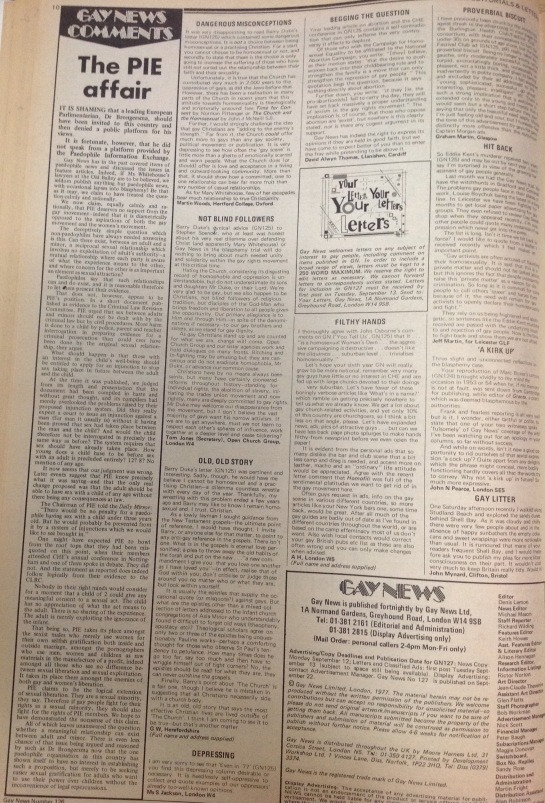 ‘Over-Dramatised Report’ from Graham Wilkinson, Hove, Essex [CHE’s organiser of the Nottingham Conference which caused controversy over Dr Brongersma delivering a speech and a workshop scheduled to discuss Paedophilia]

‘False Sentiment’ from Patrick Wilson, Kent is concerned about PIE’s exploitative lack of regard for the inequality of infancy in adult-child sexual “relationships”

‘Back Stabbing’ from Keith Hose, ex-Chairman on behalf of PIE

‘In Perspective’ from Ian Harvey, W2

‘Nothing Sacrosanct’ from Micky Burbidge, N19 [co-drafter of PIE’s submission to the Criminal Law Reform Committee alongside Keith Hose, Chairman]

‘Slippery Slope’ from Julian Carter, Dorset – a lone voice “Whatever next for CHE – necrophilia perhaps?” 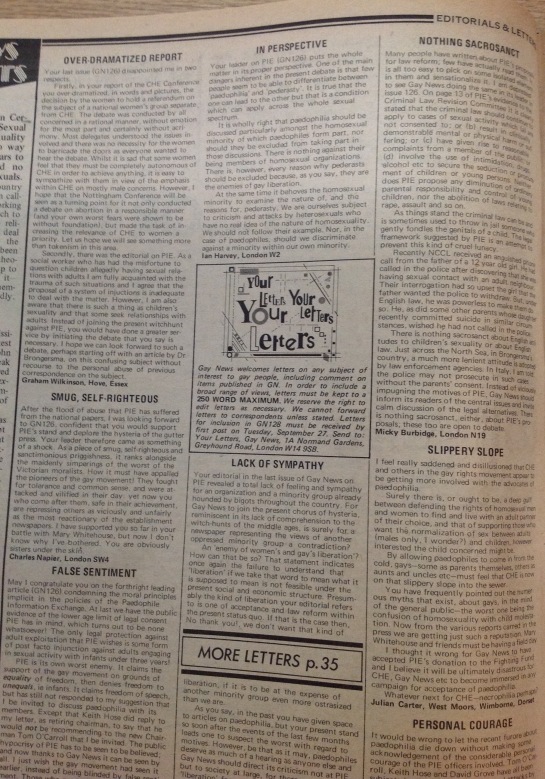 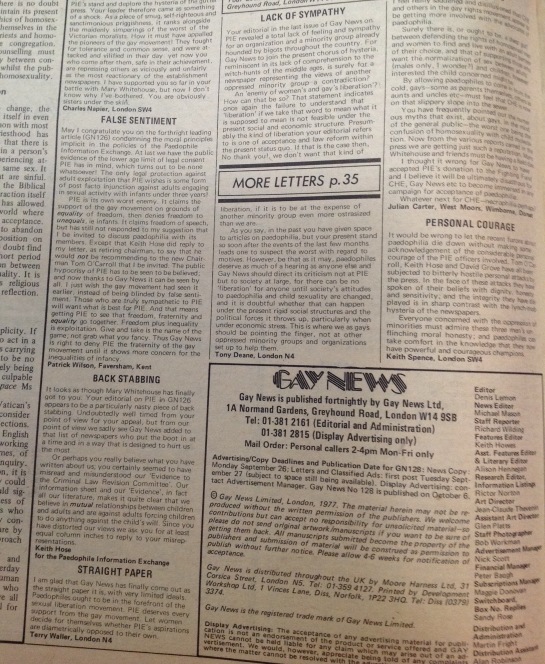 ‘Mob of Harpies’ from Don Street, London W11 who consumed with guilt at his own cowardice in not confronting the National Front in solidarity with PIE now urges “But if we do nothing, these evil forces will grow” — the evil forces, in his view, are those opposing PIE such as Mary Whitehouse’s NVLA and the Festival of Light.

‘Problem Unanswered’ by Michael Walker of SW1, a PIE member

‘Squalid Level’ from Bill Thornycroft, London SE27: “The victims are not only the adults who realise they have sexual feelings for children but children at large. At present children suffer extreme oppression — any express by children that is seen by adults (especially parents, teachers, police) as being sexual, is slapped down unmercifully.”