Children who were evicted from The Hollies were sent 200 miles away to the Bryn Alyn home in North Wales, which is now known to have been staffed by paedophiles who abused countless children in their care. See Southwark Council and Bryn Alyn

Orchard Lodge, the Southwark Council home where Trevor Groom was moved to, was at the centre of another scandal when it was revealed that convicted paedophile Daniel Swales had been given a job there as a care worker. See Child Sex Beast on the Run

Children who were evicted from The Hollies were sent 200 miles away to the Bryn Alyn home in North Wales, which is now known to have been staffed by paedophiles who abused countless children in their care. See Southwark Council and Bryn Alyn 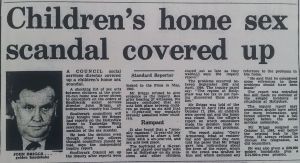 “In Lambeth, London, 124 youngsters have been separated from friends and moved to alternative homes as far away as North Wales”

Did Lambeth Council also send children to Bryn Alyn? Neighbouring council Southwark did – see Southwark Council and Bryn Alyn – and child sexual abuse was rife in both Lambeth and Southwark children’s homes at the time.

A swimming instructor jailed for ten years for abusing boys may have preyed on hundreds of children, police said.

William Hook, 63, was the first person to be prosecuted after a police and local authority investigation into care homes in London and the South East.

He was jailed at Kingston Crown Court yesterday after admitting 26 charges of serious sexual assault and indecency against six boys, four of whom have since attempted suicide. Detective Superintendent Andy Kay, who has been overseeing the investigation, said after the case that Hook came into contact with hundreds of young boys in care. “We are quite certain there are other victims out there.”

Judge Kenneth MacRae told Hook: “This is a sordid tale of depravity, self-gratification and corruption. You robbed children of their innocence, embarking upon classic grooming techniques. You bought their affection or made them reliant or submissive to you.”

Hook hung his head as the judge added: “One can only hope your victims can now begin to repair their shattered lives.”

Detectives are investigating the sexual abuse of up to 200 children at care homes in South London between 1974 and 1994. Officials from Lambeth Council in South London are helping.

Hook was arrested after the sister of one of his victims contacted police after reading about the inquiry, and detectives eventually found several boys who had been abused in the 1970s by a tattooed hunchback whom they knew as “Mr Mark”. This man was identified as Mark Peter Merchell, who had worked as a swimming instructor at Shirley Oaks Children’s Home, Shirley, Surrey, where Lambeth and neighbouring Southwark accommodated boys in council care.

Merchell’s real name was found to be Anthony Wenzel Petermichl. Police tracked him down through the Swimming Teachers Association, which had issued certificates to some of the boys, and by the time he was arrested in December 1999 he had moved to Great Yarmouth, Norfolk, and changed his name again, to William Alfred Hook.

Detectives found a cupboard in his home that had been converted into a “shrine” to children, with an altar and photographs of boys and girls.

Helen Kenward, consultant social worker with the investigation team, said: “All his victims were extremely intelligent. That was the profile he chose. They have been left with terrible after-effects. Some have turned to drugs, some have resorted to alcoholism and some have had difficulties in forming relationships.”

Miss Sally O’Neill, for the prosecution, told the court that Hook showered his victims with gifts, including bicycles, diving watches and cassette players, before abusing them.

The boys said that Hook insisted that the young swimmers he coached took their lessons without wearing swimming trunks. Miss O’Neill said that Hook selected favourites, offering them “special coaching” after other boys had left the pool, which was next to the children’s home.

Superintendent Kay said that Hook would have been in contact with children as young as two in the nurseries of the care homes. He said that the investigation into abuse of children in London care homes was continuing, and that there are inquiries into children’s homes in Southwark and in Tower Hamlets in East London.

In all 13 full-time detectives are working on the team, and 11 people – nine men and two women – have been arrested. Two men are on police bail, and further arrests are expected. The director of social services for Lambeth said yesterday that the same horrors could happen again.

Speaking after Mr Hook was jailed, Lisa Christenson said: “I cannot promise this will never happen again. But children in care must be a primary focus of any council. The council let down those children very badly but we are talking about events 23 years ago. My job is to make sure this never happens again.”