A judge slammed the scandal of ‘rentboy’ vice rings in London’s West End yesterday as he jailed a gay social worker for four years.

“One can only hope that the realisation by punters of the dangers of sexual transmission of diseases such as AIDS will give them cause for thought.”

His attack came after Abraham Jacob, 45, was convicted of living off the earnings of teenaged male prostitutes.

The judge told him: “You must learn that young men are not pieces of meat on display on a rack to be sold like merchandise in the market.”

Jacob who cared for the elderly was found guilty by [  ] majority after the jury retired for 14 hours.

Runaway boys were displayed in Wimpy bar windows for clients to select for sex.

The judge told Jacob: “You are a menace to young men. They are human beings entitled to be treated with dignity.” The judge also praised the police for mounting ‘Operation Circus’ to smash the rings. 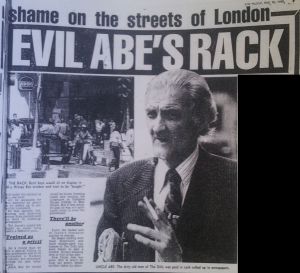 Mistakes from the past aren’t down to us

The evil that exploits young runaways 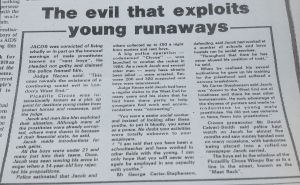 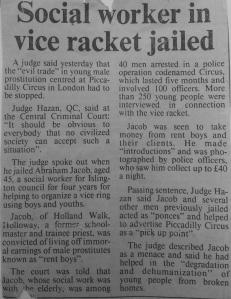 A judge said yesterday that the “evil trade” in young male prostitution centred at Piccadilly Circus in London had to be stopped.

Judge Hazan QC, said at the Central Criminal Court “It should be obvious to everybody that no civilized society can accept such a situation”.

The judge spoke out when he jailed Abraham Jacob, aged 45, a social worker for Islington council for four years for helping to organize a vice ring using boys and youths.

Jacob of Holland Walk, Holloway, a former schoolmaster and trainee priest, was convicted of living off immoral earnings of male prostitutes known as “rent boys”.

The court was told that Jacob, whose social work was with the elderly, was among 40 men arrested in a police operation codenamed Circus which lasted five months and involved 100 officers. More than 250 young people were interviewed in connection with the vice racket.

Jacob was seen to take money from rent boys and their clients. He made “introductions” and was photographed by police officers who saw him collect up to £40 a night.

The judge described Jacob as a menace and said he had helped in the “degradation and dehumanization” of young people from broken homes.