Andrew Sadler was a popular prep school teacher. But as this chilling investigation reveals,he was at the centre of a vast and sophisticated network of paedophiles, many of them occupying top jobs, who with sickening cunning have infiltrated our public schools…

RAHOVA Prison on the outskirts of Bucharest has a fearsome reputation.
A hangover from the days of Ceausescu, the jail’s very name once evoked terror for those who dared defy the Romanian tyrant’s regime.
Things are different now – Ceausescu is long deposed and the building has been modernised and newly painted. A friendly official directs me through security, and up to the second floor of the men’s wing.
The wing commandant brings Andrew Sadler to meet me. I hear him before I see him. Even speaking halting Romanian, the public school accent is unmistakable. 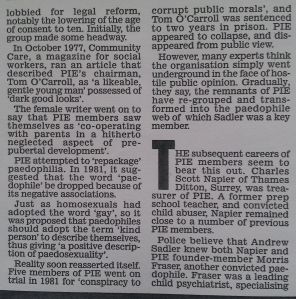