The ‘Cabinet Minister scandal’ ran for exactly one week at the height of the Miners Strike, 21st June-28th June 1984. It started with a denial in The Times, and ended with libel threats and an MP being gagged by the Speaker of the House of Commons. It was never mentioned again in British newspapers.

If the Thatcher government believed the ‘MI5 smear’ story, then why wasn’t there an inquiry into MI5’s alleged role in the scandal?

The way the Thatcher government dealt with the scandal was similar to the way the Elm Guest House scandal was suppressed in August 1982. That story made the headlines for 10 days before the Attorney General joined forces with Elm Guest House’s lawyers to threaten libel action against any newspapers that dared to print further allegations. Elm Guest House: The History of a Cover-Up. 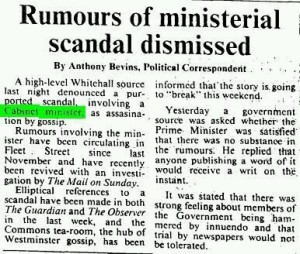 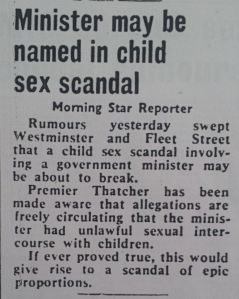 LONDON, Thursday: The threat of another sex scandal shaking the British Government has spurred the Prime Minister’s office to issue a firm denial of any ministerial impropriety.

Downing Street this morning told AAP that writs for libel would be issued against any newspaper or broadcasting body that identified the minister around whom rumours have been circulating for some time.

Government officers described the stories as “assassination by gossip”.

The Communist Morning Star today reported “a child sex scandal involving a Government minister” might be about to break.

A Guardian columnist disclosed that another newspaper was investigating “a sensational Whitehall sex scandal”, but gave no details.

The Observer also teased with the mention of “scandal, or rumours of scandal” when offering a number of reasons for a lift on political temperatures.

The Times political correspondent today said rumours involving a Cabinet minister had been circulating since last November and had been revived with an investigation by The Mail on Sunday.

The correspondent, Anthony Bevins, says the Commons tearoom – the hub of Westminster gossip – has been told the story will going to “break” this weekend.

According to The Daily Telegraph, the minister concerned has denied the rumours and said he would take legal action if identified in connection with them.

“Because the minister mentioned is of Cabinet rank, it can be taken that the security services have investigated the rumours,” reported James Wightman, political correspondent of the Telegraph.

“It can also be taken that the minister has seen the Prime Minister about the matter. Mrs Thatcher has clearly given him an expression of her unqualified confidence.”

The Conservative Party Government was shaken soon after its landslide re-election last year when it was learned that the party chairman, Mr Cecil Parkinson, and his secretary, Miss Sara Keays, were expecting a child.

Mr Parkinson, a personal friend of Mrs Thatcher, resigned from the Cabinet and is now undergoing a “rehabilitation period” on the back bench.

The sex scandal rumours come at a time when Mrs Thatcher’s Government is under fire over the increasingly violent miners’ strike, which has been running for 102 days. The Queen has made known her concern.

LONDON – Two British newspapers reported Thursday that yet another scandal involving a Cabinet minister is about to surface. But government officials angrily denied the reports and threatened libel action against anyone naming the minister allegedly involved.

The latest reports, one of them suggesting that a minister has been involved in sexual misconduct with children, emerged eight months after Industry Minister Cecil Parkinson was forced to resign when it was disclosed that his mistress was to give birth to his child.

Rumors that another minister in the government of Prime Minister Margaret Thatcher was about to be involved in scandal have circulated in political and journalistic circles for the last 10 days.

The basis of these rumors is unclear, as there is nothing to suggest that a complaint has been made to police. The first published references to the matter appeared Thursday in the Times and the communist newspaper Morning Star.

The Times did not mention sex but said rumors of a scandal involving a minister date to last November and have been revived by an investigation being conducted by the Mail on Sunday newspaper.

It said the word is circulating in the House of Commons tea room, the hub of Westminster gossip, that the story will break this weekend. Stuart Steven, editor of the Mail on Sunday, declined to comment.

The Morning Star said, “Premier Thatcher has been made aware that allegations are freely circulating that the minister had unlawful sexual intercourse with children.”

A government official angrily denounced the reports as “rumor-mongering without the slightest shred or tissue of evidence.”

Other sources said the government is not prepared to tolerate trial by newspapers and if the minister is named, libel writs will be issued immediately.

The Daily Telegraph, in a follow-up to the Times and Morning Star reports, said Thatcher had been “aware in advance of the denial and the threatened legal action.”

It said the minister who was the subject of the reports had been to see her and sho “has clearly given him an expression of her unqualified confidence.”

Because the man is of Cabinet rank, the Telegraph said, “it can be taken that the rumors have been investigated by the security services.” 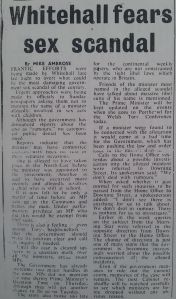 LONDON – Prime Minister Margaret Thatcher has stepped in to quell
widespread rumors that her Government is in the grip of another major sex
scandal only months after her most trusted lieutenant, Trade and Industry
Secretary Cecil Parkinson, was obliged to resign when his mistress
announced that she was going to have his child.

Rumors circulating in Westminster involve much more serious
allegations. They suggest that a senior Cabinet minister is a child-sex
offender. If they are substantiated, the minister will have to do more
than step down. He – and the Government – will be faced with the prospect
of a full-scale trial.

Members of Parliament and Whitehall officials have known of the gossip
for several months. National newspapers have been feverishly investigating
it. But the first the public heard of it was a report carried this week in
that pillar of the Establishment, The Times. The story was brief,
contained a Government denial and was careful to name no names.

Mrs. Thatcher, who has been aware of the alleged scandal for some time,
is said to be satisfied that it is quite untrue. Her Downing Street office
has so far restricted itself to a single terse statement on the subject:
“We are not in the business of commenting on rumor.”
Top Whitehall sources have been more forthcoming. They have condemned
the rumors as “assassination by gossip” and said the Prime Minister would
not tolerate a highly respected member of her Government being subjected
to trial by the press. MPs have been warned against trying to name the
minister under cover of parliamentary privilege.

Newspaper editors have been told that publishing the minister’s name
without cast-iron proof would land them with a multi-million-dollar
lawsuit.

Tory MP Geoffrey Dickens, a leading anti-child-sex campaigner, who
three years ago named the former high commissioner to Canada, Sir Peter
Hayman, as having links with pedophile groups, has admitted he is under
pressure to name the minister in the House of Commons. But he does not
intend to do so: “This man’s political future may be at stake. I also have
to guard against the possibility that a dirty tricks department may be at
work.”
But Fleet Street journalists investigating the story believe there is
more to it than that. As one of them remarked yesterday: “If we were just
talking about a one-off incident – if all the newspapers had the same
story – it would look like a setup. But there appear to be so many
different instances that the rumors can no longer be dismissed out of
hand.”
The British public may not have to wait much longer to discover whether
the scandal is fact or fiction. One national newspaper is said to have got
its hands on an incriminating dossier and there is speculation it is
preparing to name the minister in the next few days.

LONDON: A Thatcher Government Cabinet minister may have committed sex acts with boys at least twice, Britain’s Morning Star newspaper claims. The Communist daily kept the sex scandal rumours alive by claiming reports indicating the first offence by an unnamed minister occurred before he was a minister. But the second was said to have been more recent and involved a boy at school. Downing Street is continuing to dismiss the rumours as “ridiculous”.

The Morning Star said Whitehall had made urgent approaches to officials asking them not to mention the name of the minister. 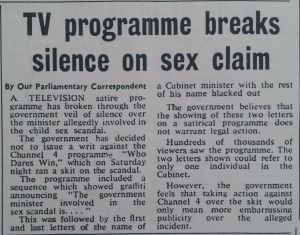 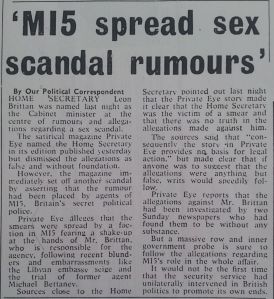 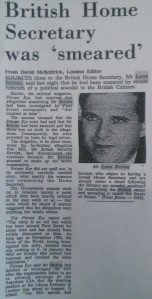