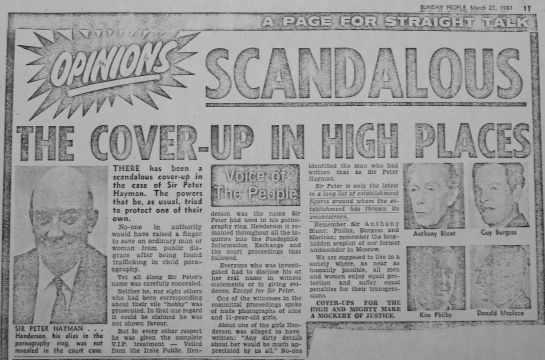 There has been a scandalous cover-up in the case of Sir Peter Hayman. The powers that be, as usual, tried to protect one of their own.
No-one in authority would have raised a finger to save an ordinary man or woman from public disgrace after being found trafficking in child pornography.
Yet all along Sir Peter’s name was carefully concealed.
Neither he, nor eight others who had been corresponding about their vile “hobby” was prosecuted. In that one regard it could be claimed he was not shown favour.
But in every other respect he was given the complete V.I.P. treatment – Veiled from the Irate Public. Henderson was he name Sir Peter had used in his pornography ring. Henderson it remained throughout all the inquiries into the Paedophile Information Exchange and the court proceedings that followed.
Everyone who was investigated had to disclose his or her real name in witness statements or in giving evidence. Except for Sir Peter.
One of the witnesses in the committal proceedings spoke of nude photographs of nine and 11-year-old girls.
About one of the girls Henderson was alleged to have written: “Any dirty details about her would be much appreciated by us all.” No-one identified the man who had written that as Sir Peter Hayman.
Sir Peter is only the latest in a long list of establishment figures around whom the establishment has thrown its smokescreen.
Remember Sir Anthony Blunt; Philby, Burgess and Maclean; remember the long-hidden sexploit of our former ambassador in Moscow.
We are supposed to live in a society where, as near as humanly possible, all men and women enjoy equal protection and suffer equal penalties for their transgressions.
COVER-UPS FOR THE HIGH AND MIGHTY MAKE A MOCKERY OF JUSTICE.